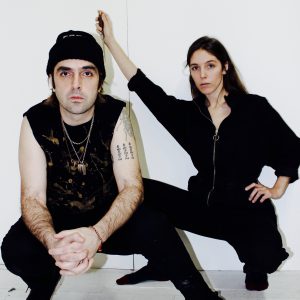 Red Mass is a gathering of musicians, agent provocateurs and artists, from around the globe. Created by Roy Vucino as part of the ‘Free Creative Enterprise’ TA DA arts collective, its goal is to create music and art, in various mediums while incorporating techniques of automatic creation as well as chaos magic. To do so, the Mass forgoes any allegiance to a specific genre or sound and works outside of the standard band format. This allows the Mass to work with as many international collaborators as it likes regardless of their experience or musical background. The present core of ‘Red Mass’ is now composed of Roy Vucino and partner Hannah Lewis, who are eager to explore new soundscapes and to collaborate with musicians all over the world have worked with more than 100 participating artists and musicians.

Previous collaborators include members of Fly Pan Am, Hot Snakes, Godspeed You! Black Emperor, King Khan, Mac Demarco, Hugo Mudie, John Kastner, Evan Dando and Mike Watt. The project has played festivals and toured in America and Europe, released two well-received albums and has amassed more than 25 releases on independent labels most of which are now out of print. As above,so below. We welcome you to the Red Mass.